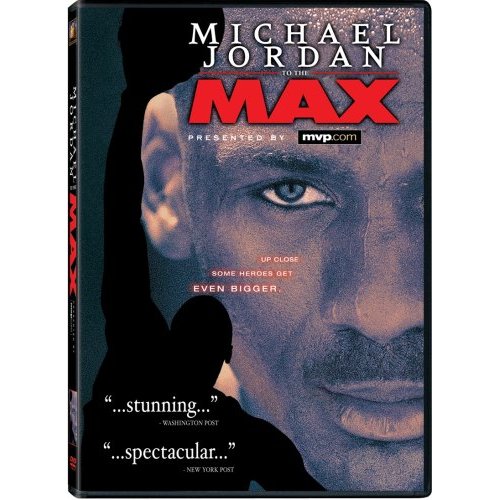 With Michael Jordan making his first appearance as a playable character in the NBA 2K video game series when NBA2K11 is released later this year, I thought it was only appropriate to take a look back at one of the greatest NBA movies ever made starring MJ himself. Michael Jordan to the Max was released May 5, 2000 on IMAX screens across the nation. At the time, I had no idea that cameras, let alone IMAX cameras were following around MJ in what would be his final run at an NBA championship. Out of nowhere the theatrical trailers hit our T.V. screens and NBA fans had a must see movie on their hands. Even though the movie was made for the IMAX screen it is still just as enjoyable to watch on DVD.

Narrated by Laurence Fishburne, the movie takes us through the Chicago Bulls 1998 playoff run and Michael Jordan’s quest for his sixth and final championship ring. The IMAX cameras were rolling on the Bulls as they defeated the New Jersey Nets in the First Round, the Charlotte Hornets in the Eastern Conference Semifinals, the Indiana Pacers in the Eastern Conference Finals, and the Utah Jazz in the NBA Finals. Throughout the Bulls’ journey through the 1998 playoffs, the film offers a unique viewing perspective with the use of multiple camera angles, extreme slow motion, and close-ups of the on-court action. A great example of this is when the Bulls are playing the Pacers in game 4 of the Eastern Conference Finals. After Reggie Miller nails a three pointer to put the Pacers up by two with .07 seconds left in the game, MJ catches an inbound pass out of a timeout and launches a three. The ball hits the backboard, rims in, and comes out. This sequence is dramatically played out, from Miller hitting the three-pointer and celebrating in extreme slow motion to MJ’s shot going down the cylinder of the rim and seen coming out from every angle imaginable.

Interspersed within the footage of the Bulls’ 1998 playoff run is footage that delves into Michael Jordan’s personal life, giving the audience a history lesson on the basketball great. We are taken to the United Center several times throughout the film, where Jordan sits on a stool speaking his mind. Here he reveals that he was cut from his high school basketball team as a freshman and that his father’s death was the toughest moment he had to experience in his thirty years of life. The death of James Jordan led MJ to retire from basketball in 1993 and pursue a career in baseball, James’ favorite sport. MJ was not a great baseball player as can be witnessed by footage of him playing for the Chicago White Sox minor league team where he drops a no-brainer fly ball in the outfiled and strikes out at the plate several times. In addition to the commentary from Jordan himself, there is also commentary from his mom Deloris Jordan, coaches Phil Jackson and Doug Collins, Bulls teammates, sportswriters, and others, all revealing more and more about the NBA legend.

After reading this post, I hope that I have encouraged you to go out and buy or rent this movie, and enjoy it as much as I have. Michael Jordan to the Max is definitely a must see for any NBA fan, even if you’re not a Michael Jordan fan. This movie gets 5 basketballs out of a possible 5.