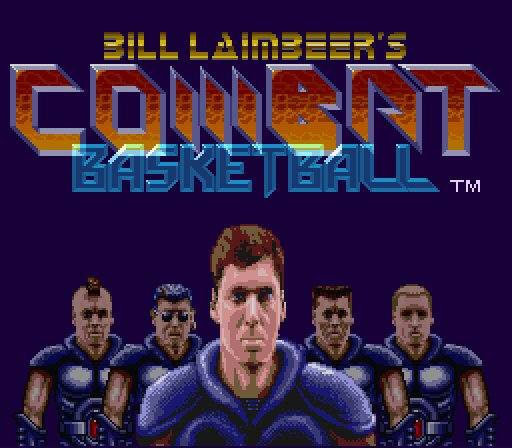 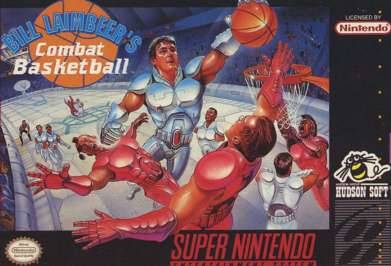 Bill Laimbeer’s NBA career stretched fourteen seasons long from 1980-1994. Throughout that span of time he earned the nicknames “the prince of darkness,” “street thug,” “ax murderer” and “His Heinous.” [1. http://www.nba.com/history/players/laimbeer_bio.html]

He was a physical player that backed down to nobody. Just take a look at the following excerpts from the 2002 book, The Detroit Pistons: Four Decades of Motor City Memories:

“In April 1987, Michael Jordan spoke out, saying, “Laimbeer is the dirtiest player in the NBA,” when the teams brawled at Chicago.”

“Countless tussles with the Celtics centered around Laimbeer. He pulled down Larry Bird on a layup in game 3 of the Eastern finals at the Silverdome, leading to his national-televised mugging by Robert Parish two games later.”

“On April 19, 1990, with the 76ers trying to claim the Atlantic Division, Laimbeer and Barkley got into a fight…”

“Upon his 1993 retirement, Laimbeer was no doubt the most penalized player in NBA history, compiling roughly $69,000 in fines over a dozen incidents, plus $17,000 in lost pay.” 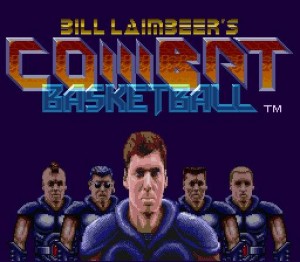 I bet you already knew that Laimbeer was a physical player, however, I bet you didn’t know that his physical play translated into a November 1991 video game titled Bill Laimbeer’s Combat Basketball (BLCB) released on the Super Nintendo Entertainment System (SNES) by Hudson Soft. [2. http://www.gamefaqs.com/snes/563524-bill-laimbeers-combat-basketball/data] The creators couldn’t have picked a better title for a video game featuring the menacing player. Imagine a basketball game where there are no rules: no fouls, no goal tending, no traveling, and where the players are armed. Well that’s what you get in BLCB.

Here’s the official summary of the game from ign.com:

“It’s the year 2030, and Laimbeer is the commissioner of the pro basketball league. Seeing as he’s in charge, he fires all the refs and throws the rulebook out the window basketball the way he likes it. Now the players wear armor as weapons and mines are thrown from the stands, adding a whole new element to the game of hoops.”

Whoa! The year 2030? How did they come up with that? In the year 2030, Bill Laimbeer will be 73 years-old. On the cover he looks pretty damn good and he moves around the court like he did in his prime. I guess he either freezes himself at some point, enlists the help of a really good surgeon, or taps into the foutain of youth Ponce De Leon style.

Let’s assume that “the pro basketball league” mentioned in the above summary is really the NBA and that Hudson Soft couldn’t afford to pay for the licensing of the name. With that said, even though it’s the year 2030, I just don’t see David Stern retiring. But who better to pass off the torch to than a 73 year-old Bill Laimbeer? Maybe a 69 year-old Dennis Rodman? Anyways, lets get onto the gameplay.

The court in BLCB has a unique design as seen below. The key has a trapezoid shape  just like the key used in international play. Were they trying to predict that pro basketball in the USA would follow international basketball standards in the future?  I guess they got that one wrong since the international key is actually taking shape of the NBA key pretty soon. 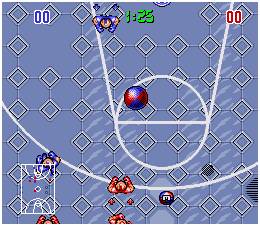 The game starts when a robot tosses the ball up at center court for tip-off. Each team has three players. You can even play as Bill Laimbeer if you earn enough money to purchase him. You earn money by playing games and by collecting money that appears on the court during play. You can also trade for other players if you don’t have money to purchase them. Players are rated on their different skills ranging from agility to strength to passing to shooting. If you have too many shooters you might want to trade for some stronger players that can help you on defense.

In addition to being able to travel, goal tend, and shove players out of the way, you can also shoot weapons at opponents. The crowd even gets into the thick of it by throwing mines onto the court. Even though the official game summary states that there are no rules, there are two caveats: you can be called for out of bounds and backcourt violations.

If you think about it, BLCB was sort of an early NBA version of NFL Blitz. In NFL Blitz you can tackle the wide receiver without getting called for passing interference. In BLCB you can shove the offensive player without being called for a foul. 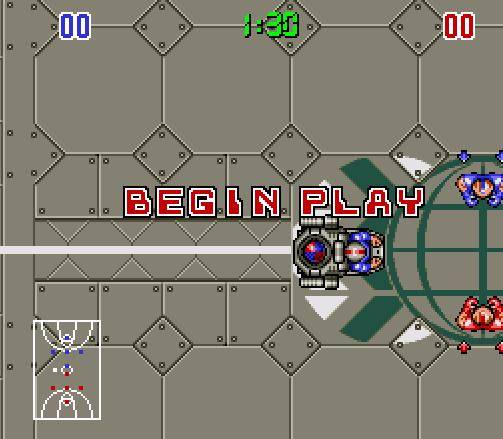 It’s easy to understand why this game didn’t go over well with basketball video game fans. Bill Laimbeer is the only real person you can play as. BLCB would have been a lot more fun if you could play as other NBA players too. Not many fans want to play as the star defensive player. They would rather play as the star offensive player such as Clyde Drexler, Michael Jordan, Reggie Miller, or Shawn Kemp. Defense doesn’t really sell video games. Highflying dunkers and clutch shooters do. Overall, the game has a good title and interesting concept but fails to deliver in several categories of gameplay. If Hudson Soft had licensed real NBA players and NBA team names, had a few more camera angles, and better controls, this game might have been a bit more successful.